President of the Supreme court 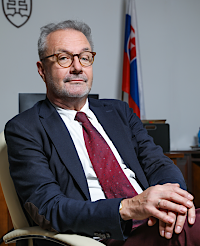 Justice of the supreme court since: 2015

Career before being justice of the Supreme Court:

He has been on a number of research fellowships abroad. He studied international humanitarian law and asylum law at University of Oxford, Queen Elisabeth House, Exeter College, Great Britain, and human rights at John Abbott College, Quebec, Montreal, Canada.

Ján Šikuta has been active in judicial profession for almost four decades. From 1995 to 2004, he served as a Legal Officer at the Office of the UN High Commissioner for Refugees.

From 2004 to 2015, he served as a judge of the European Court of Human Rights in Strasbourg. He has been a judge of the Supreme Court of the Slovak Republic since 2015 and a presiding judge of a panel since 2016.

President Šikuta is an author or a co-author of dozens of scientific publications published in Slovakia and abroad. He has also delivered numerous lectures as a quest speaker abroad.